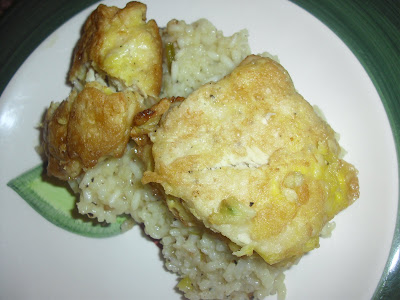 Wow! This stuff was absolutely yummy. My sister in law, Kellie, sent it over to me saying that her husband said it was "restaurant worthy" and yes, it was! It was eggy and breaded and the lemon was a delicious touch. I paired it with a lemon rice (that I'll post tomorrow), which I semi burned, but was able to salvage. I am not great at cooking rice without a rice cooker. Hence, the purpose of this blog.=) Here is the recipe and HERE is where I got it:
BREADED GARLIC CHICKEN IN LEMON-BUTTER SAUCE
*Note: if you prefer more sauce, since this makes a lighter, smaller amount of sauce, consider doubling the sauce ingredients.


Place the seasoned flour in a large gallon-size ziploc bag. Set aside. In a shallow pie plate, beat the eggs until mixed and add the Parmesan cheese. Whisk to combine. Set aside.

In a large skillet, melt one tablespoon butter and one tablespoon olive oil over medium heat. Let it begin to heat and sizzle while you prepare the chicken but be careful not to let the butter burn and turn brown.

Put the four chicken breasts in the bag with the seasoned flour, close the bag, and shake to coat the chicken in the flour. One by one, take the chicken out of the bag and dip into the egg/Parmesan mixture. Place the chicken carefully in the skillet with the hot oil/butter. Repeat with the other chicken breasts. Let the chicken cook on the first side, without moving or flipping the chicken, for 1-2 minutes until a nice, golden crust has formed. Carefully, using a wide spatula, flip the chicken and let it continue to cook for 1-2 minutes on the other side until it is golden brown. The chicken will flip easiest if it has had time to sizzle and cook to form a nice crust.

Remove the chicken to a 9X13-inch pan. Set aside while you make the sauce.

In the same skillet that you browned the chicken, melt the remaining four tablespoons butter. Add the minced garlic, lemon juice, and parsley. Simmer the sauce for 1-2 minutes, stirring and scraping up any browned bits that were on the bottom of the skillet.

Pour the sauce evenly over the chicken breasts and bake at 350 degrees for 35 minutes, until the chicken is cooked through. Serve over noodles, rice or potatoes.
Posted by Heather at 5:00 AM