I wrote this using story starters in my writers toolbox by Jamie Cat Callan.  I've had it for years and just barely used it.  I can't believe I waited so long!  It is fun and was shocked at what characters were born and what the setting was. I hope you enjoy it and would appreciate any feedback. I have never written fiction anything so I am open to any critique. Thank you!


On Tuesday, Margaret told me she liked the little oranges with the seeds better than the ones I bought. I hated her for that.  I was the one doing the shopping so naturally, she should just be grateful and accept the oranges, seeds or no seeds.  And honestly, who wants to have seeds in their oranges?  Picking them out is the mess. Chewing them up is not enjoyable.  And really an orange is an orange.
But life has been like this for us since day one.  Really,  it was the day she was born.  15 months after I was born, the only two daughters of a Spanish olive farmer.  We lived in a small coastal town named Soller, hot and humid in the summer, cool and humid in the winter.  The orange groves were all around us, the oranges sweet, all varieties, sizes and shapes.  Groves and groves and the tourists flocked to them.  We would work with my mother at the olive stand in the market where we sold the green and black olive varieties that are only available in Spain.  We would offer samples to the people, all the while hoping that they would buy and come back for more.  Our olives were some of the best on our small island of Mallorca and the olive oil was even better.  We were educated in olives, the types, the tastes, the uses.  While I was a quieter child, more patient with the customers, Margaret was louder and often frustrated that we had to stay at the stand.  She wanted to run, to be free to run, especially in the orange groves where you could get lost, but never feel lost.  She found a home there.  But I was olives through and through.  What is more opposite than olives and oranges?  Black to orange, small to big, bitter to sweet.
So, there we lived and worked and thrived, mostly.  She started taking up a lot of bad habits, habits that didn’t go away nicely.  She was a flirt from a young age, always looking for the approval of people, especially the orange farmer’s son, Alejandro. They met at age three and were constant companions, even more so than she and I.  He, a dark haired, blue eyed boy, eyes like the ocean.  She, a blond headed, green eyed girl, a rare beauty and a rare find in our small village.  They would play in the Mediterranean Sea.  Nothing could scare her, cliff jumping from the highest heights or stealing oranges from neighboring farms.  Alejandro went along because he couldn’t resist her charms and because he wanted to see what she would do next. It was a partnership of danger and daring and curiosity.


I came home one day to find them returning from their latest adventure, a climb to one of the highest mountains in the village.  Mama was shouting at them both and the shouting being returned by Margaret but not Alejandro. He stood there sheepishly with his hands in his pockets.  They had gone into forbidden territory, an area where wild animals roamed freely.  An area without anybody to watch over them.  The conversation ended with a smack across the face and Margaret holding her hand to her cheek, tears in her eyes, and a shocked look upon her face.  I sat there open mouthed, surprised but not completely, because these fights had been building up for months.  Nobody moved and all I could do was sit there and watch as the lemon gelato melted all over the counter into puddles that nobody could really clean up completely. 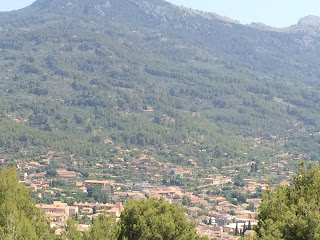 The village of Soller.  The only time I have ever been overseas was to Spain this last summer.  It was magical and hot. I didn't know that the characters were going to end up in Spain. 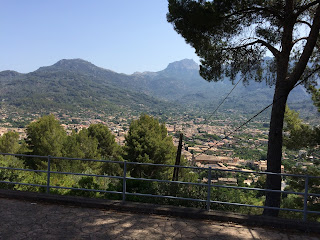 Posted by Heather at 7:21 PM No comments:

I wrote this while the kids were asleep and Blake watched a show.

I have a long list of things I enjoy: reading, writing, laying in bed, Dr Pepper, brownies and ice cream, hugs, crafts, gardening and on and on. But recently, as in the last two days, it’s been baking. I have baked bread, blueberry muffins, granola, pita chips, and tomorrow cookies.  And I have cooked chili and I guess it’s not cooking really, but fruit smoothie popsicles.  It has made a ton of dishes and it has kept my sanity going. It has been negative degrees for a week or so. Who knows? After a day or two of it, you lose count and then you start imagining those hundred bulbs you planted in the spring coming up.  Hello, tulips, I am talking to you.  You better do you work come April!  Anyway, I enjoy baking and I always have.  The first thing I remember baking that was really “mine”, was brown sugar muffins.  They were a recipe from a family cookbook by my Aunt Becky.  I made them pretty much every week when my parents were on their weekly date.  My siblings would ask me to make them and bug me till I did.  So, we had tuna casserole, brown sugar muffins and peas.  Always, peas.  My favorite veggie back then, so I got to choose because I was the cook.  And now I have baked so many different things and tried recipes I never thought I would.  I have made gigantic cinnamon rolls that freeze perfectly.  I have made cream cheese banana bread, which is now my trademark in my little town and quoted as “the best banana bread I ever had”.  Streusel topping is the secret, people.  And I have made rolls and bread and applesauce muffins and brownies and brookie cookies and cinnamon bread and more.  And I love it. I love making pretty food. I love making it more than eating it.  There is something so gratifying about creating something delicious and passing it out to neighbors on a cold day or on their birthday or just because I like you.  And when the kids come home from school or Blake comes home from work and they breathe in that fragrant air and ask what that smell is.  I have mountains of recipes yet to try.  A binder full of recipes torn from magazines at doctor’s offices (shhhh), from church cookbooks, from friends.  I want to make some kind of goal to make them all but the list just keeps growing longer and longer! And who will eat all that food?  My kids won’t try “weird” stuff and you can only freeze so much!  So, I will cook and bake and pass it on to neighbors and friends.  I will cook that soup that only adults like and feed my 80 year old neighbor, Tom who will really appreciate it.  And I will keep doing what I enjoy.  Even If it is just to get me through the winter or so I can start my bakery someday.  Ahh, bakery.

Food photography is not my special talent but these are definitely the best chocolate chip cookies I've ever had. Ever.  It was the first time I browned butter approximately six years ago. They'll definitely be in my bakery.

Posted by Heather at 8:00 AM No comments: