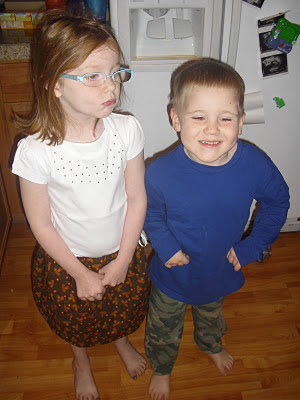 My daughter being a total butt because she didn't want my 4 year old in the picture. The 2 year old was in bed so I didn't get a picture of her in her skirt but she was super cute in it!! 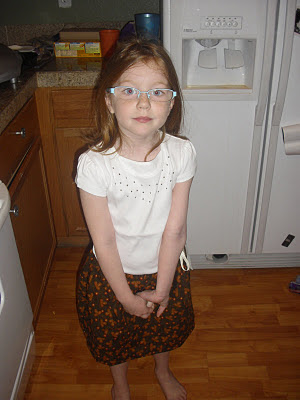 The first time I attempted to make skirts for my girls, they ripped up the sides. The second time was less bad, but I had the wrong measurements. They were turned into sleeping bags for their baby dolls. I never knew I would spend 3 hours making sleeping bags for baby dolls. lol But thanks to my wonderful friend, Mitzi, I was able to figure it out! And I sewed 2 in 2 hours. The second one only took me 45 minutes. So, now I am thinking of using leftover fabric to make some summer skirts for my girls instead of paying a ridiculous amount for longer skirts! I used the tutorial from
House on Hill Road
Props to her for creating a super detailed tutorial!
I used ribbon instead of making my own ties because I found some in my junk box. Much easier!
Posted by Heather at 5:00 AM

Email ThisBlogThis!Share to TwitterShare to FacebookShare to Pinterest
Labels: sewing

They turned out great! You're a talented seamstress! :) We should get together for sewing projects more often. It was so fun the other day just to be able to sit and visit. :)