B is for Brother

B is for Brother

Blake is the oldest of five brothers (there is a sister older than him, as well).  When I first met "The Bell Boys", as we like to call them, I was pleasantly surprised.  They weren't as stinky and obnoxious as I had expected and they were pretty nice! As I have gotten to know them better, it has been so fun to watch Blake in the older brother role. He gets along with all of them.  He tries hard to relate to what they are doing in their lives. He has been called for late night chats about job changes, video game discussions, computer problems and hilarious youtube videos.  He is a supportive brother.  He always says the best about them all, even if they might not deserve it.  He is the instigator of LAN parties or "nerd parties", as I like to call them.  There are many late nights when complete with movies, video games, Oreos, chips and Dr. Pepper.  They get matching Walmart t-shirts whenever they get together and take pictures in them.  They fall asleep to movies and snore in harmony.
Blake is loyal and always helpful.  There is no doubt that he is a leader and a good leader, because he doesn't point out that he is a leader.  In fact, he will probably be pretty embarrassed that I am writing this.  He was the first one to get a drivers license, a job, go on the church service mission, college, babies, career.  He is a good person to follow.  I love all The Bell Boys because they all get along so nicely.  There is nothing greater than seeing a bunch of brothers busting up over stories or reminiscing old times.  The stories are usually the same, but that's the point.  The camaraderie has been created and will stand no matter the distance. 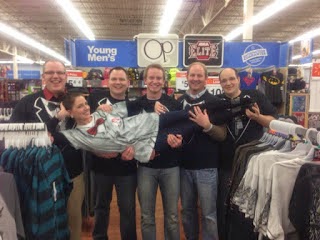 There is nothing like a big brudder. They're the best!

My husband is one of five boys too! And he has an older sister--Cool! When I first met the Smith Boys, I was amazed by them. I love it when they all get together! My husband and his brothers have a tradition--they go on a Man Trip every other year and do something crazy none of the wives would probably ever want to do (like kayaking The Everglades).

Now, as a mother of 5 Smith Boys myself, I look forward to when they are grown and can appreciate the bond and friendship forged when they were young.

Great post, Heather! Hope you are enjoying the A to Z!! :)

Which one is he in the photo?

Eileen @ In My Playroom (also doing the A to Z Challenge)

Wonderful! ... but I can't help wonder about their poor mother raising 5 boys is even one was like my second brother :)

Patricia, so true! I don't have an older brother, but I do have a younger brother who I loved to torture. Kristin, you are a true gem having five boys! I knew I liked you from the beginning.=) Eileen T, he is second from the left. Mylifelivedfull, lol. Sometimes I think girls are worse, but they are both great and terrible ha!

He is the leader because he is the stinkiest of us all!

We all let him be leader because he can out stink us all!